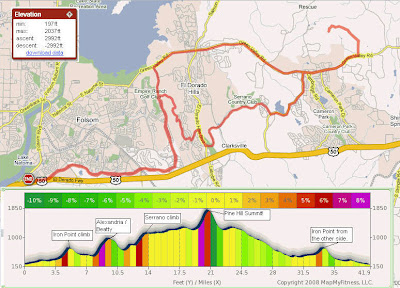 I hope to do this ride in March:
Posted by Orion Slayer at 3:54 PM 1 comment:

This is an attempt to help the flegling Rancho Cordova Bicycle Advocates group stay connected. It has not been established that this is our name, but we are a group who want to promote and improve bicycle riding in Rancho Cordova.

The first meeting was on Wednesday, November 12th. About 15 people attended the meeting. We were treated to a delicious meal courtesy of Rebecca Garrison, Director, 50 Corridor Transportation Management Association. We introduced ourselves by saying what area of Rancho Cordova we were from and why we were interested in being part of the group. The majority of the group commute to work on bikes through the city and most everyone reported riding the American River Parkway for recreation.

Mark Thomas, City of Rancho Cordova, Public Works, answered a lot of questions about the City’s planned projects. Some of the planned projects include adding access to the Folsom South Canal (FSC) but indicated many of these projects are on hold because of lack of funds.

We finished the night with a hour brain storming session to discuss strengths, weakness, and desired changes related to bicycling in South Rancho Cordova and surrounding.

The next meeting of the group is scheduled for Wednesday, January 14, 2009. Please join us at and help develop the future of bicyling in Rancho Cordova!
Posted by Orion Slayer at 5:09 PM No comments: